ApolloServer 2.0 - how to create a graphQL server

It's almost 2 months that I'm working with GraphQL and after a bit of struggling I fallen in 😍love😍. If you never heard about GraphQL I can tell you that it's strongly used by Facebook and, after beeing open-sourced, it has been adopted by other companies like:

So what is exactly GraphQL and why we should invest our time to learn it?

GraphQL is a query language for APIs and a runtime for fulfilling those queries with your existing data. GraphQL provides a complete and understandable description of the data in your API, gives clients the power to ask for exactly what they need and nothing more, makes it easier to evolve APIs over time, and enables powerful developer tools.

Sorry? Yes this is the same question I had when I read the doc... so let me try to share why I love graphQL. From my short experience I found it very useful because the client has more power and he can ask the data and the fields in the format that he wants. If we think about REST api, they are built in a very strict way and when the application grows it needs to create a lot of endpoints to accomplish all the possible scenarios. Just to give a quick example: 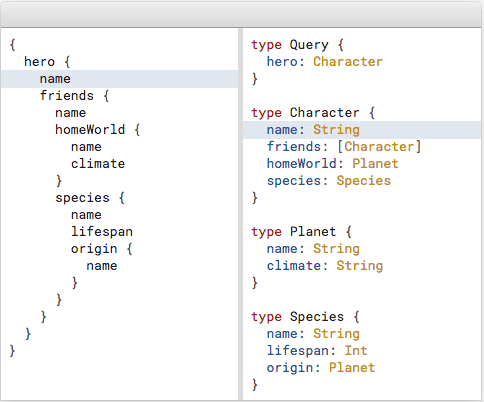 After this brief introduction we can start our configuration installing mongo on our machine. For mac users is quite easy with brew but in case you're not familiar this is the official guide to follow. When the installation is completed we can start mongo server and create our database:

I use a gui tool called Studio3T to create my db but feel free to use the tool you prefer. The name of our database will be:

Now that we almost understood what is and why we should use it let's built our server. The infrastructure we'll build is:

As you can see we don't have too many dependencies apart apollo, mongoose (the connector for mongo) and typescript.

In the script section we created dev and prod but we're going to use dev for our tests running the command:

Due of typescript we need a tsconfig.json and tslint.json to compile the project and set stylistic rules like indentation, whitespace, etc. If you've no idea how to create them you can easily copy paste them:

We need to create a src folder and under it same sub-folder to organise better our code: 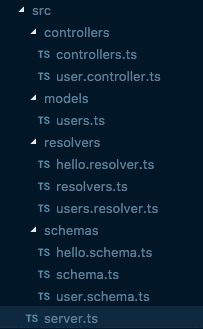 [gist id="7497a4b46616d91c85e6da138c2b3626"] Let's stop one moment and explain better what is inside user.schema.ts. It contains 3 main block: - query - mutations - User The query (line 11) will retrieve the list of users (an array) where each of them will contains id, name and surname (line 18). The mutations, instead, will mutate the structure of our database adding, deleting or update a user. After defining the capabilities of our GraphQL database we need to implement them with our resolvers.

The resolvers folder will create the same structure of schema folder:

The most complicated one is the users.resolver.ts because it's performing mutations and query. For each action, it's calling the userController that will go to our mongo db database and will return the expected result. The arguments of each resolver are:

Our controller folder will keep exactly the same structure:

Finally we can run our server:

and try out some of the actions we defined: 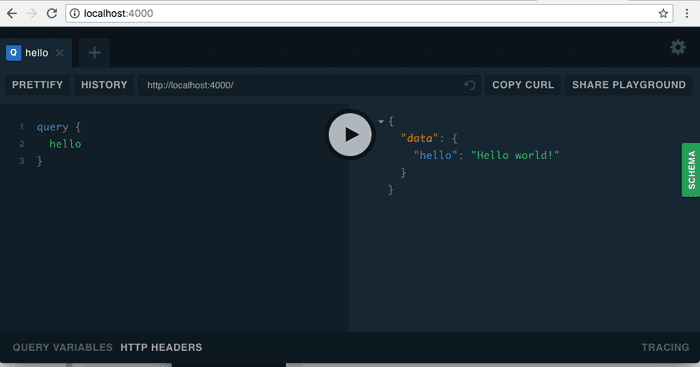 - Fetch all the users:

I setup a git repro if you want to have a try without performing all the steps I described:

In the next section will see how to restrict access integrating a login with google service.